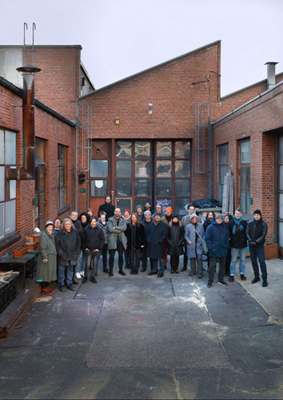 The listed ensemble of buildings of the Uferhallen is one of the central locations for artistic and cultural production in Berlin and accommodates not only concert spaces, dance projects, theatre productions, sound studios and rehearsal rooms, but also the studios of more than 60 artists. The so-called Kunstaktien (art shares) are a project launched in 2011 by Hans-Martin Schmidt and Ingrid Jonda – who from 2007 to 2017 were founders and developers of the Uferhallen AG on this former factory site in Berlin-Wedding – with the aim of securing the long-term existence of the Uferhallen as a cultural site and preventing property speculation. 132 artists created a total of 3,300 shares for the Uferhallen AG, which has been converted into a public corporation. The acquisition and distribution of the shares was intended to secure the right to a say in the future use of the studio location.

In the summer of 2017, the Uferhallen site was acquired by a group of investors. In view of the new ownership, the continued existence of the Uferhallen as a production site for contemporary art represents a central objective of cultural policy. On the initiative and with financial support of the Senate Department for Culture and Europe and the district of Berlin-Mitte, Neuer Berliner Kunstverein (n.b.k.) acquired 20 art shares from artists working on the Uferhallen grounds.

With the presentation of a total of 24 art shares – n.b.k. already acquired a number of 4 in 2011 – it is the intention to make the unique project accessible to and appreciated by the public. The exhibition also addresses the experimental approach of art shares being original works of art and capital investments at the same time, as well as their purpose of securing the existence of permanently affordable spaces for contemporary art production and art presentation.